Since Monday (22.07) tram traffic on Wolności Street in the centre of Zabrze has been carried out thanks to overlay turnouts supplied by the KZN Bieżanów Group. Such a temporary surface state allows to maintain tram traffic and reduces to a minimum the need to interfere with the existing road system during repairs and modernizations.

As the name suggests, the overlay turnout is built directly on the existing tracks, and its entry, i.e. slight elevation of rail vehicles above ground level, is made possible by special ramp tracks. Its installation does not require any modification of the existing track and road system, only precise, point-to-point fixing to the ground is necessary. 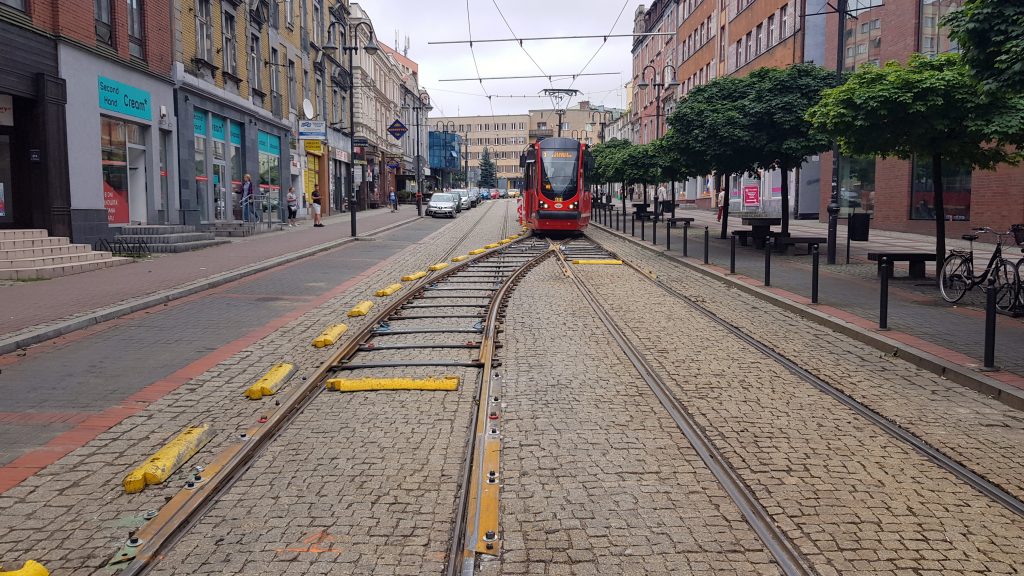 – The construction of overlay turnouts is dictated primarily by the need to maintain the continuity of tram traffic within Wolności Street, on the section between Średnia Street and Galeria Zabrze – emphasizes Tomasz Bis, Head of the Construction Team at KZN Rail, realizing for the company Tramwaje Śląskie S.A. task „Reconstruction of tram infrastructure in Zabrze, along Powstańców Śląskich Street and Religi Street from Wolności Street to the crossroads with Stalmacha Street and its branches”. – According to the agreement, the Ordering Party requires that during the modernization works related to the reconstruction of the hub at the intersection of Powstańców Śląskich and Wolności Streets, the possibility of tram traffic should be maintained – adds a representative of the KZN Bieżanów Group.

– One of our priorities during the implementation of infrastructural investments is to minimize the difficulties for passengers by maximizing the possible maintenance of tram traffic. This is why we require Contractors to keep one track passable when modernising double-track lines – explains Bolesław Knapik, President of the Management Board of Tramwaje Śląskie S.A. and adds: – Such solutions allow to provide tram passengers with transport, so they do not have to change their commute habits and approach temporary difficulties or unavoidable changes with greater understanding.

The overlap turnouts manufactured by the KZN Bieżanów Group in Kraków are devices of a specific construction, whose monoblock switches are made of wear-resistant steel. Such a solution significantly increases the service life of a turnout. The installation of two overlay turnouts enables the trams to run in both directions on one track, located on the southern side. During this time, the contractor may carry out construction work on the out of service section of the northern track. After the completion of this stage, the overlays and traffic will be transferred to the already modernised track to rebuild the second track, currently operated on a bilateral basis. In order to maintain traffic safety on a single-track section, Tramwaje Śląskie used a special, staggered traffic signalling system informing about the track occupation.

The overlay turnouts manufactured by KZN Bieżanów have a reinforced construction. And the segmental construction of these turnouts enables its installation in track systems of various widths of the intertrack. This enables easy assembly/disassembly, transport, adaptation to local track systems and reuse in different locations. Apart from the possibility of creating a staggered traffic system – as in Zabrze, in the case of shutting down the tracks in both directions, single overlay turnouts can also serve as ends. However, such a system requires two-way rolling stock to be operated. After completion of the current stage of works in Zabrze, KZN Rail will use overlay turnouts on other construction sites, as well as renting the structure to other entities.