The SWITCHER technology is dedicated to transporting the railway turnouts developed by Kolejowe Zakłady Nawierzchniowe “Bieżanów” Sp. z o.o. is an innovative solution guaranteeing the high initial quality of turnouts to be incorporated into the track. The system protects the turnouts against deformation and damage during loading at factory, transport and unloading. The basis of the system are specially designed and constructed cars integrated with a safe and precise lifting system and fitted with modules for fastening and stiffening the turnouts during transport and handling. This patented innovative and unique concept transport system was developed by KZN Bieżanów Research and Development Division. 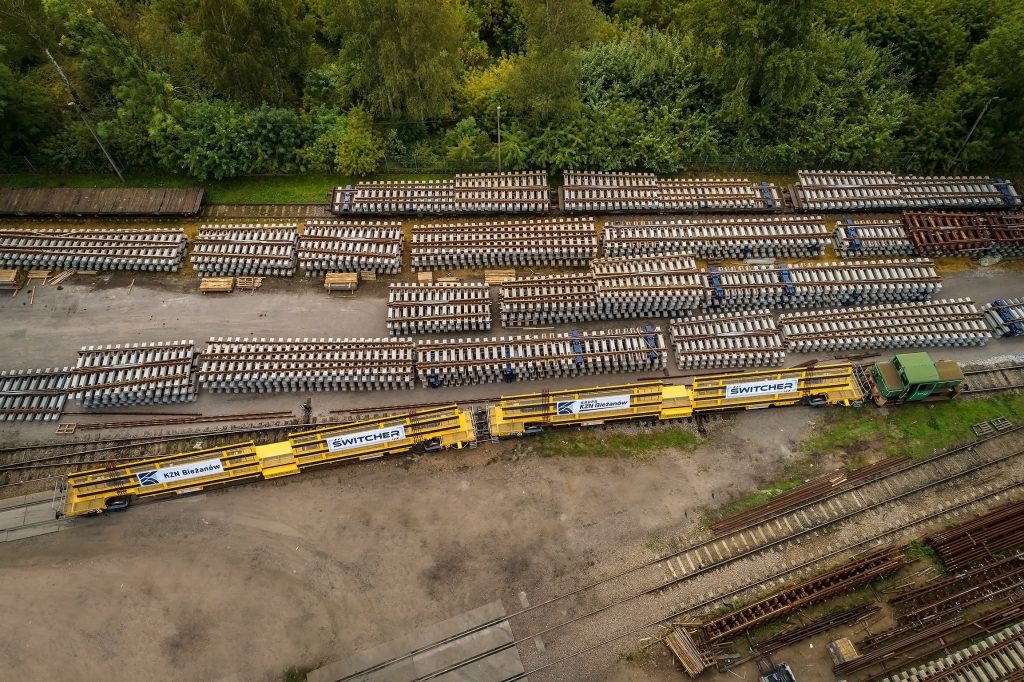 Currently in Poland in most cases the turnouts, after assembly and technical acceptance at the factory, are disassembled and transported on site where they are reassembled. Sometimes even the assembly is not carried exactly on the site but nearby and only then the assembled switch is transported to the place of installation, often without the required protection. In such case the turnouts are prone to deformation and damage during loading. If they are not transported in a controlled manner and are unloaded inappropriately (by dumping or dragged from the trailer by means of excavators), the geometry of the turnout will be adversely affected.

Problem. The current transportation method which focuses on delivery of the turnouts in parts (by road or rail transport) should not be used in the long run. This method significantly lowers the initial quality of the turnout and affects the safety, making it more difficult to maintain turnouts in the required technical condition. This is particularly true in case of technologically advanced turnouts adapted to the speeds of 160, 200 or 250 km/h, where every deviation from the structural assumptions causes significant problems related with the maintenance and operation.

The infrastructure manager has identified this problem several years ago and proposed to use the model employed in the Western Europe which relies upon transportation of turnout components on flat cars in blocks. This solution does not require the turnouts to be disassembled in factory and reassembled on site. The loading, transport and unloading can – if the necessary equipment and organisational measures are available – be carried out in conditions allowing to prevent the deformation and damage from occurring.

Innovative system. KZN focused on the problem in a wider context and the task was to ensure the highest initial quality of turnouts to be incorporated into the track. Special attention was paid to turnouts dedicated to high speeds which can be distinguished by their significant length. The complex approach resulted in development of a logistic model which will allow to transport long turnout components such as the entire switch blocks, connecting rails and common crossings for Rz 1200 type turnouts. This allows to limit the scope of works to be carried out on site. The innovativeness of this design was noticed by the Polish National Centre for Research and Development which decided to co-finance it from the public funds (action 1.5 OP IE in the Innotech III programme, In-Tech path). It is noteworthy to mention two patent applications to the Polish Patent Office and international patent application in PCT mode. The high usefulness of this solution arises from the fact that the car with a turnout attached does not exceed the loading gauge, and operation of cranes on site does not require the overhead lines to be removed. What is even more important, the KZN’s transport system based on rail cars allows to transport the turnouts dedicated to hight speed track systems, including the turnouts with the radius of R1200.