Agreement for the supply of turnouts for the Coal Trunk-Line

During the TRAKO fair in Gdańsk, KZN „Bieżanów” and PORR signed an important agreement for the delivery of nearly 150 modern railway turnouts, thus securing the deliveries of these structures as part of the modernisation of the key section of the Coal Trunk-Line (pol. Magistrala Węglowa).

A week after signing a PLN 1.24 billion executive contract with the manager of the railway network for the modernisation of a fragment of the popular Coal Trunk-Line sometimes called “węglówka” between Kalina and Rusiec Łódzki (Lot C, a 71 km section), PORR company secured supplies of railway turnouts for this investment. Nearly 150 of these specialist constructions will be manufactured by KZN „Bieżanów”. More than a third of the turnouts in this pool will be delivered to the construction site in blocks – fully assembled and ready for immediate installation, thanks to the use of the Switcher system. These are the key provisions of the contract between PORR and KZN, worth several dozen million zlotys, signed today at the TRAKO trade fair in Gdańsk. 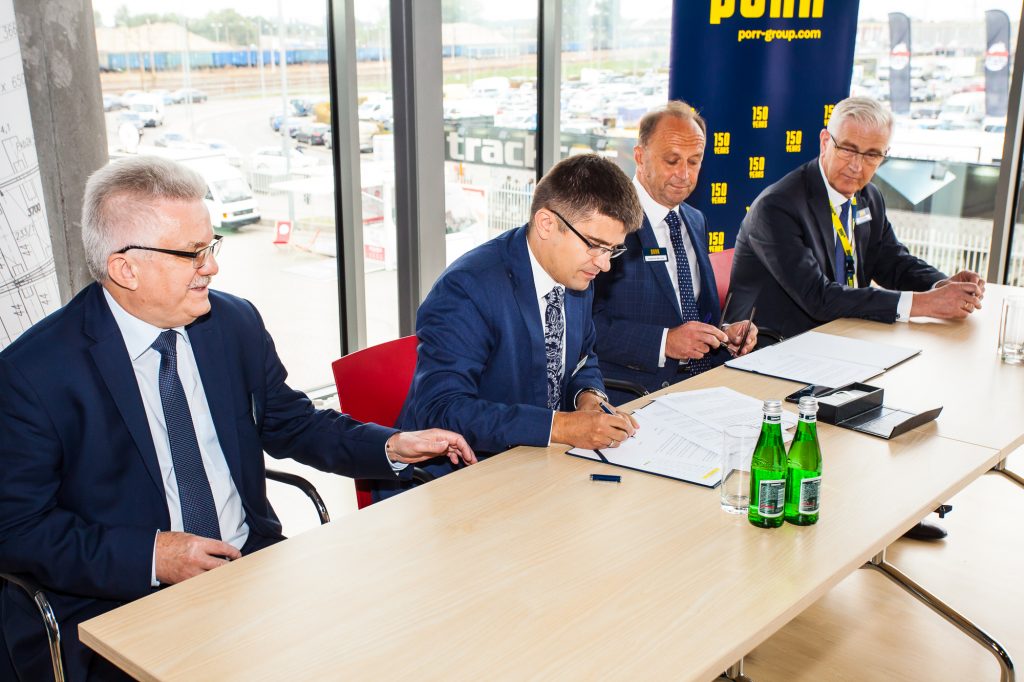 – This contract is important for us, not only because of its measurable financial value, but above all because it uses our potential evenly. Both the one related to production and the advanced logistics of turnout blocks using the innovative Switcher system,” said Rafał Leszczyński, President of KZN Bieżanów, during the signing of the contract. What is important for me is that the contract will improve freight traffic on the railway network. For many months now, I have been pointing out that, following the improvements to the infrastructure dedicated to passenger transport that have taken place in recent years, we must improve the infrastructure dedicated to freight as soon as possible. Increasing the capacity of the main freight lines; improving access to ports, border crossings and terminals within the country; building additional links, tracks and passes; all this will allow us to better connect our railways to the system of global goods transit and derive profits from it for further investments – stressed the President of KZN Bieżanów.

– This is our next agreement, which confirms the good cooperation so far. And cooperation with experienced and proven suppliers is one of the basic guarantees of timely and well executed investment – said Siegfried Weindock, Member of the Management Board of PORR SA, when signing the contract

– I would like to stress that the recently signed agreements between PKP PLK and contractors for the execution of large modernisation contracts, such as access to sea ports, coal and E59 trunk lines, will enable the railway market to be revived in the coming months. In order to implement the material scope of the National Railway Programme, it is necessary to maintain this trend – added Leszczyński.

Modern turnouts provided by KZN will be one of the key elements of the infrastructure, which will allow to increase the parameters of the Coal Trunk-Line. They will enable, among other things, the movement of goods sets with a load of up to 221 kN per axle. Reconstructed tracks and new safety devices will enable passenger trains to be operated at speeds up to 140 km/h and freight trains up to 120 km/h. The model of deliveries of prefabricated turnout blocks will improve the initial quality of these structures, which will translate into easier, cheaper and longer maintenance of operating parameters of the modernised Coal Trunk-Line.